He attended Forest View H.S. in Arlington Heights, Illinois, where he was a 3-time varsity letterman, 2-time conference champion and district champion. After moving to California, Mark coached at Summerville H.S. in Tuolumne for 3 years before moving to Calaveras H.S. where he was a teacher, swimming and wrestling coach for 34 years. He has served as co- coach with Vince Bicocca the past 35 years, and the teams have won 25 league championships and 7 CIF Division champ- ionships. Between 2000 and 2004, the team compiled a 65-0 undefeated streak.

As head wrestling coach at Atwater High School for 25 years, he produced many league and CIF Section champions, with numerous CIF State Tournament medalists. One of his outstanding wrestlers was Jamil Kelly, an Olympic Silver Medalist and CA Wrestling Hall of Fame member. Paul has been very active with USA Wrestling as a coach, official, and director of coaches education. He was selected Outstanding Official at the Junior National Duals. Bristow was also the Junior National team coach for 15 years. He is currently the principal at Sequoia High School in Merced.

Actively involved in wrestling for the past 35 years as an athlete, coach and athletic director, he first competed at Livermore H.S. where he placed in the CIF North Coast Section 3 times, winning a championship as a senior. The 2-time high school All- American placed at the CIF State Meet. At Chabot College, Clark was a community college State Champion. Later at Cal Poly, he placed 3rd at the PAC 10 Championships. He coached at Granada H.S. for 12 years, with 31 league champions, 35 Section medalists and 21 State qualifiers. He is a board member of the CA Wrestling HOF.

He was the wrestling coach at Miramonte H.S. for 33 years, and his teams won 16 league dual and/or tournament titles, 2 CIF North Coast Section championships, and 2 CIF Section runners-up. Roger served as league wrestling chairman, and he was the physical education department chairman for 18 years. In 1979, he was the Bay area “Super Sport” Coach of the Year. In 1990, he was named the California Coaches Association’s Coach of the Year. In 1991, he received the CIF North Coast Section’s Honor Coach Award. His name is included on the Wall of Fame at Miramonte H.S.

He began his coaching career at Santa Rosa H.S. before moving to Piner H.S. where he had many league and CIF Section champions. Jake has been the wrestling coach at Santa Rosa Junior College for the past 25 years. He has hosted an annual Invitational Dual Tournament for the past 20 years, plus numerous Northern California Regionals and the State Community College Championships. Fitzpatrick has served as chairman of the Nor Cal Community College Wrestling Coaches Association, and he has officiated high school wrestling for 25 years, including at CIF Sections and State.

In 19 years of as the head wrestling coach at Enterprise High School, Rod compiled a dual match record of 128-38-0. His teams finished in the Top 10 at the CIF North Section Masters Meet 12 times, with three 3rd place finishes. He volunteered to coach for youth soccer and junior high school wrestling. Forseth served as tournament director of the CIF North Section Masters Tournament for 21 years, and he was instrumental in fundraising to save sports, to reinstate wrestling at Shasta College, and to establish a wrestling program at Simpson College in 2012 where he now coaches.

A wrestler at San Jose State University, he competed in the 1984 Freestyle Olympic Trials. His coaching began at El Camino H.S. in South San Francisco, and continued for the past 36 years at Wll C. Wood H.S. in Vacaville where he started the wrestling program. Jensen’s teams have won 309 dual matches, and he has coached 3 CIF Section champions, 40 CIF State qualifiers, 11 CIF State placers, and 8 high school All- Americans. He’s been director of the Wildcat Invitational Tournament for 26 years, and league wrestling rep 18 years. He was 3X Monticello Empire League Coach of the Year.

For 2 years, Ed was the starting fullback on the Chico State University football team. He began his 38-year wrestling coaching career at Willows H.S. where his teams won 26 league championships, the CIF Northern Section’s Small Schools championship 3 times, the CIF NC Division 2 championship 10 times. Zuckerman was the athletic director and the Westside League wrestling rep. He served on the league rules committee for 5 years, and he was seeding committee rep for 10 years. He’s in the Chico State Hall of Fame and received the CIF Distinguished Service Award in 2009.

He started wrestling at Arvin H.S. in 1958. After boxing for 2 years at Bakersfield College, Clyde transferred to Chico State where he won the Far Western Champ- ionship in 1962. Forrest became a teacher at Pleasant Hill H.S., coaching football and wrestling there for 18 years. He coached both sports for 20 years after moving to College Park H.S. where he had numerous league and Section champions, coaching Chris Bodine to a State title. He mentored many young coaches in the Bay area, and in 1984 he was selected as the first ever North Coast Coach of the Year.

After starting his wrestling coaching career at St. Helena High School and then at Saint Mary’s College, Mattson was one of the 12 original teachers to start Acalanes High School. He was an outstanding wrestling coach, and his teams dominated the league for many years. Mattie was a leader and a respected wrestling coach in the Bay area. He received the Martin Olivarri Award for his achievements and leadership as a wrestling coach. He retired in 1966, but the league continues to present an annual Erwin Mattson Award to the outstanding athlete in the league. 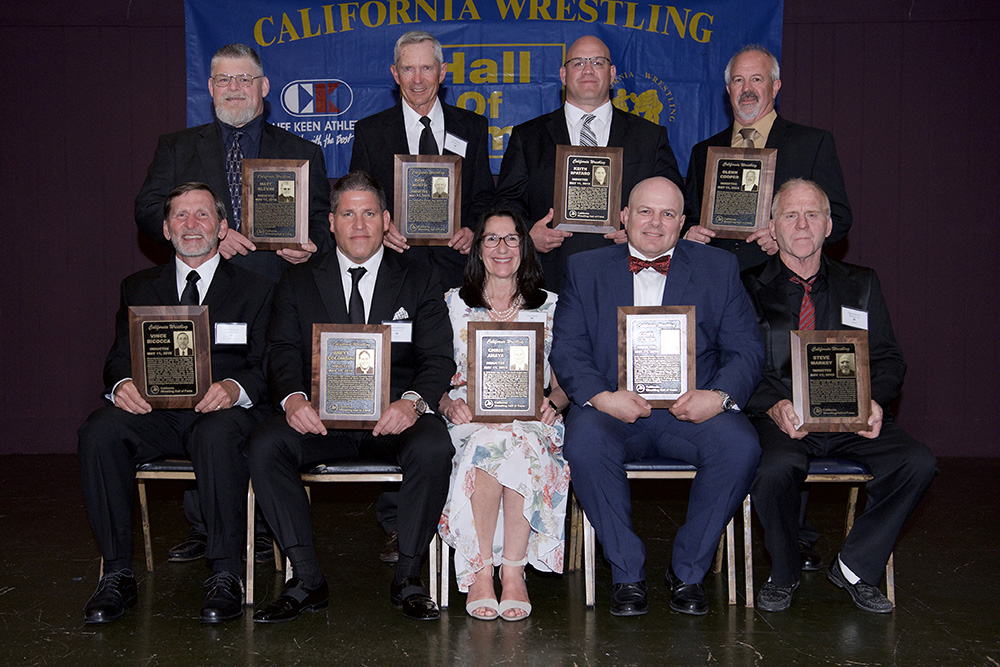 In 1972, he was one of the most sought after high school wrestlers in the country during his senior year at San Lorenzo H.S. when he was 52-0 with 35 pins. He won the CIF Section championship and the Northern California Invitational Tournament where he was selected as Most Outstanding Wrestler. Anaya earned high school All-American recognition from Wrestling USA magazine. He attended Chabot College and won the State Community College championship. A two-time All-American, he also won the National Freestyle championship in 1975. He was nationally ranked at Cal Poly.

He started his coaching career at Linden H.S. in 1975. Four years later, he moved to Calaveras H.S. as a teacher, counselor, athletic director and coach. He was voted the Northern California Officials Associa- tion Coach of the Year in 2004, and he was awarded the CIF Sac-Joaquin Section’s Model Coach Award in 2009. In 43 years of coaching, he had 217 league champions, 58 Section Masters place winners, 4 State medalists and one NHSCA Senior National champion. His teams won 29 league and 22 Section championships, with a dual meet record of 462-154-5; 63-0 from 2000-04.

At Mountain View H.S. where he was a league champion and CIF Coast Section finalist two times, he was the champion as a senior, placing 4th in the CIF State Meet. At West Valley College, Matt was a CA Community College state champion and All- American in 1985. At San Francisco State, he was a two-time NCAA Div. 2 All-American for placing twice at the D2 Championships, winning a national championship in 1990. Matt was an assistant coach at SF State for 3 seasons, and in 1997 they won the NCAA D2 National team title. He was a champion and 3-time finalist at CA Freestyle Open.

He was a 3-time league champion and twice winner of the CIF North Coast Section for Ukiah High School where he placed 3rd at the CIF State Championships as a junior, winning a championship as a senior in 1990. Brett placed 2nd at the NHSCA National Championships, earning All- American honors. He wrestled at the University of Minnesota from 1991-95, placing 2nd three times in the Big 10 Conference Championships. The two-time NCAA Div. 1 All-American was selected as the University’s Athlete of the Year in 1995. He coached at both Ukiah and Windsor H.S.

At San Juan High School, he was a State Qualifier as a sophomore, and a member of the CA Cultural Exchange Team to Japan. Glenn was a 2-time CIF Sac-Joaquin Section champion and winner of CIF State champ- ionships in 1975 and 1976. In the 1975 State Tournament, Cooper gave Dave Schultz his last defeat in high school. Glenn won the Arizona State Freestyle Champion- ship, and in 1976 he won National Free- style and Greco-Roman championships. He attended and wrestled at Cal State Bakersfield where he was a NCAA Div. 2 champion and an All-American.

A league and CIF North Coast Section champion at Alameda High School, he was 5th in the CIF State Championships in 1978 and was a CIF State Champion in 1979. His high school wrestling career record was 112-6. Markey placed second at the High School Junior National Tournament, then attended Chabot College where he won a California Community College State Championship and earned All-American recognition. Steve also wrestled at Cal State University-Bakersfield where he won a NCAA Division 2 National Championship, again earning him All-American honors.

He wrestled at Fallon H.S. in Nevada where he was a State Champion before moving to Bella Vista H.S. in his senior year. He went 51-1 and placed 3rd at State. At the Univ. of Nebraska, he was a team captain, a 3X NCAA qualifier and Big 8 Conference champ. One of the top wrestling officials in the country, Olson has officiated NCAA Div. 1 and 2 championships and four times at the NWCA All-Star Duals. He has officiated most of the major high school and college tournaments in the nation, and he has served as the assignor of officials for the Northern CA Wrestling Officials Association the past 18 years.

At Skyline College and then San Francisco California’s first State, he was a 2-time conference champ- ion, 2-time Regional champion, and twice NCAA Champion named a team captain and Most Valuable Wrestler. A 4X collegiate All-American, he in 1952, has coached 24 seasons at the high school, community college and 4-year college levels. His teams won 3 league titles, 2 conference titles, and 2 Regional titles, and he was named Coach of the Year 7 times. Keith developed the Menlo College program into a national NAIA contender, with 6 Top-10 finishes and 40 national placers, 18 All-Americans, and 6 national champs.